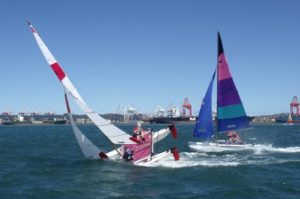 Only 3 Darts pitched up to race the last day in the Amakati Mid-Winter Series. Both Carl Zimmerman and myself were sailing Darts single handed and Graham Weyer teamed up with Neil Wadsworth to sail his Dart 2 up.

The wind was hectic for a single hander with over 20 knots, gusting a lot more, of SW blowing with quite a developed wave pattern in the part of the harbour we were sailing in. A Dart single handed is controllable up to 16 knots, thereafter it become progressively a wild animal to ride!

So the end result was, after some spectacular upwind trapezing feats, Carl Zimmerman broke his rudder staock and  never made the start. I too never made the start as I very nearly did a cart wheel on a downwind test doing 17.6knots, which then ended up as  in a Chinese Gybe breaking all my sail battens and capsizing the boat.

The only boat to start was Graham and Neil and after a gruelling tacking duel against themselves, a superb downwind leg out gybing themselves, they out smarted themselves to win convincingly! But seriously, Graham did sail a very good series in its entirety to win overall, so a hearty congratulations to him is in order.

See results on RNYC web page and on Notice Board.

We are planning to slip in an event at the Boat Show for the catamarans. Currently, only Pacer 27 trips and keelboat racing have been scheduled. More on this next week.