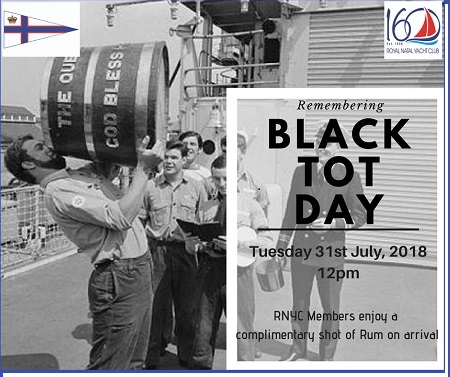 The name given to the last day on which the Royal Navy issued sailors with a daily rum ration (the daily tot).

In the 17th century, the daily drink ration for English sailors was a gallon of beer. In 1655, due to the difficulty of storing the large quantities of liquid, a half pint of rum replaced the gallon of beer.

Over time, increasing levels of drunkenness on board naval vessels became a problem and the ration was formalised in naval regulations by Admiral Edward Vernon in 1740. It was ordered that the rations be mixed with water in a 4:1 water to rum ratio and split into two servings per day.

On 17 December 1969 the Admiralty Board issued a written answer to a question from the MP for Woolwich East, Christopher Mayhew, saying;

“The Admiralty Board concludes that the rum issue is no longer compatible with the high standards of efficiency required now that the individual’s tasks in ships are concerned with complex, and often delicate, machinery and systems on the correct functioning of which people’s lives may depend”.

This led to the ‘Great Rum Debate ‘in the House of Commons on the evening of 28 January 1970. The debate closed at 10:29pm, after running for an hour and 15 minutes, with the final decision that the rum ration was no longer appropriate.

31 July 1970 was the final day of the rum ration and it was poured as usual at 6 bells in the forenoon watch (11am) after the pipe of ‘up spirits’.