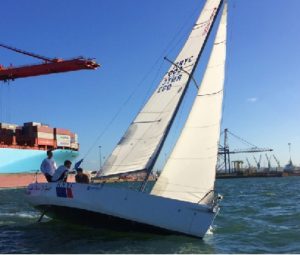 This Saturday afternoon the Pacer Team Racing fleet attracted some more new faces and provided a wonderful spectacle for those ashore who were enjoying all the shore based activities and the Yacht Grot taking place on the Ndongeni Lawns. The Clubhouse was a hive of activity and it was a challenge to round up all the participants for the Pacer sailing in time for the 14h00 start.

However with the usual quick random draw the teams were selected and boats allocated. This week the Blue team consisted of Jeremy Beckett, a regular crew member of Southern Storm, who participated onboard Pacer 1 together with his son, Matthew while Pieter Du Plessis from Gelofte Skool returned for a second outing and enthusiastic Gabriel Pennels joined the crew bringing down the average age of the crew on Pacer 1. Also in the Blue team was the crew of Pacer 3 with a crew of under 30’s consisting of Chris Coxen, Michael Boorman and Daniel Els while another crew of under 30 year olds consisting of brother and sister Rowan and Amy Price together with Spamandla Msomi represented the Yellow team on board Pacer 2 while Ricky Pyper, Eileen Black and Vanessa Mills on Pacer 4 also represented the Yellow team.

The fleet enjoyed another afternoon of perfect weather with a 10-12 knot north easterly and a clear blue sky. It is often said that Durban has only two seasons, namely summer and summer, and we are certainly beginning to enjoy the change of season. The windward/ leeward race course was laid in the deep water channel off Pier 2 using Scorpio as the Committee Boat for the afternoon. The Bridge Crew were soon heard to complain about the lack of comfort Scorpio offers compared to the magnificent R B Townsend which we have so easily become accustomed to. A further inconvenience was the fact that the anchor would not hold the boat in position until a plan was made to deploy more chain which made the crew turn pale at the thought of heaving it back onboard without the luxury of an electric windlass. Initially the course was laid very short in anticipation of an inbound vessel destined for 203 however when she did not materialise and after the fleet rounded the weather mark on their first lap the course was quickly extended and the start line extended to provide more room the fleet and less stress for the Bridge Crew. Despite the mild conditions Pacer 4 decided to retire due to a lack of manpower on board, and perhaps some suspected damaged finger nails, leaving their teammates on Pacer 2 to do all the work.

Three races consisting of 3 laps and each race lasting approximately 35 minutes kept the crews on their toes and the Hunter 18 “Lets Boogie” skippered by CJ Milne enjoyed tussling with the fleet. By 16h30 the fleet were rushing back to the moorings so as to pack away the boats and ready themselves for the Sailor’s Dinner at 18h00 leaving very little time for the usual after sailing camaraderie.  Race 1 was won by Pacer 1 followed in by Pacer 2 only 35 seconds later and then Pacer 3. The second race saw Pacer 3 claim victory over Pacer 1 by 53 seconds followed by Pacer 2 while the final race of the day saw a reverse of fortunes with Pacer 1 beating Pacer 3 by 38 seconds followed by Pacer 2.  The afternoon produced some exciting sailing with the final score seeing the Blue team win the afternoon 3-0 and again changing the face of the leader board. If you have not yet entered the challenge you should contact Margie Harris in the Sailing Office to reserve your berth and avoid missing out on the fun next week.