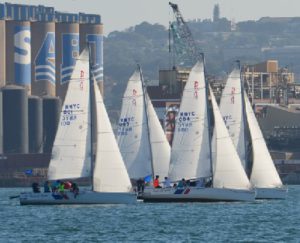 Match 12 of the Pacer Team Racing Series proved to be another wonderful Saturday afternoon of sailing. The weather Gods delivered one of those perfect winter sailing days with the conditions that Durban is so famous for. A light north easterly breeze and clear skies greeted the sailors and once again we were pleased to welcome some new faces to the team racing series. The popularity of the format seems to continue attracting interest and the standard of racing certainly did not disappoint the sailors or spectators. With very little shipping activity in the Bay the Port Captain very kindly allowed the Bridge Crew to lay the windward leeward races course in the Esplanade Channel immediately in front of the Clubhouse. This sailing venue provides superb spectator value for those ashore on the Ndongeni Lawns at the Clubhouse and the general public enjoying the vista from Wilsons Wharf. The Saturday afternoon music on the Ndongeni Lawns drew a large crowd who were treated to some exciting close racing with some evenly matched teams.

A pleasing feature of the Team Racing series is the mix of sailors participating and the number of younger members enjoying the format with a number of junior members on each boat and a strong presence from the under 25’s. This week the crews represented a mix of regular dinghy sailors, multi hull sailors and keel boat sailors with Patrick and Liam Harris, Jeremy Kriek, Steve and Robin Richmond on aboard Pacer One; Brad Rayson, Rob Le Roux, Alex Andreone, Gabriel Pennels and Patrica Kilburn on board Pacer Two; Andrew Dollaway, CJ Despey, Ian Bell and Rudi Fokkens on board Pacer Three; Rowan Price, Amy Price, Chris Coxen and Jamie Dodd on board Pacer Four.  This week the Blue Team comprised of Pacer One and Four while the Yellow Team comprised of Pacer Two and Pacer Three. The afternoon racing consisted of the usual 3 races of 3 laps each of approximately 30 minute duration. With a short beat from the start line to the weather mark the first rounding of each race was closely contested making for some dramatic footage for the photographer on board the Committee Boat. With a tactical run downwind the fleet was always sailing in close quarters and the port rounding at the leeward mark laid just off the sandbank in the turning basin ensured the crews remained on their toes. Both Pacer One and Pacer Two were seen having trouble at the leeward mark on at least one occasion proving that even the most experienced crews suffer the odd boat handling error from time to time.

Pacer One won the first race followed by Pacer Two and only 5 seconds separated Pacer Three and Pacer Four providing the Yellow Team with their first victory of the afternoon. Within moments of Pacer Four finishing the start sequence for Race Two commenced leaving the crews with no time to relax. Following a highly tactical race Pacer Four, with the younger members on board, stormed home to cross the finish line 17 seconds ahead of Pacer Three followed by Pacer One 20 seconds later with Pacer Two taking up the rear and handing victory to the Blue Team making the score 1 – 1. The third and final race for the afternoon became the deciding race for the afternoon match and the start was heavily contested by both teams with some interesting pre-race manoeuvrings while the teams were jockeying for position on the start line. Pacer Two found their form and stole the march on the fleet closely followed by teammates on Pacer Three putting the Yellow team in the lead with a change in fortunes for Pacer Four who took up the rear leaving Pacer One trying to dislodge Pacer Three from second place. Despite their best efforts Pacer One could not get ahead of Pacer Three and after an exciting race Pacer Three took line honours 11 seconds ahead of Pacer Two followed by Pacer One and Pacer Four at 20 second intervals. With the Yellow Team winning the final race they won the match with a final score of 2 – 1 over the Blue Team.

After a highly successful afternoon the boats returned to their moorings and the crews retired to the Clubhouse for the customary exchange of war stories and tales of woe from the Blues. Those members who missed the afternoon’s fun should make a date to join in next week and reserve your place early with Margie in the Sailing Office. There is also space on board the Bridge Boat for anyone wishing to observe the racing from the water and this is a wonderful opportunity for any keen photographers wishing to capture some fantastic action shots of yachts racing.