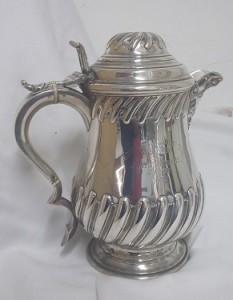 We are indeed privileged to be members of a historic club which has collected over its long history an impressive array of antiques and other memorabilia all of which contribute to our rich heritage and culture.
In keeping with other historic Royal yacht clubs around the world we have recently researched the history of some of our trophies and will be sharing with members the results of our research in a series of short articles which we hope you will find of interest.

According to the trophy register the trophy was won in February 1893 by H Brangee on the yacht “Stella” who retained the trophy. The trophy was returned to the Club in 1976 and was originally presented to dinghies; however since 1984 it has been awarded to keelers.

If any members have more information about any of the trophies featured in this series we would be delighted to share it with members.