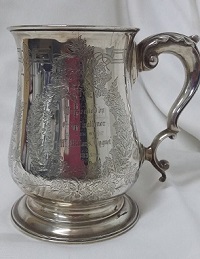 We are indeed privileged to be members of a historic club which has collected over its long history an impressive array of antiques and other memorabilia all of which contribute to our rich heritage and culture.

In keeping with other historic Royal yacht clubs around the world the Sailing Committee have recently researched the history of some of our trophies and will be sharing with members the results of our research in a series of short articles which we hope you will find of interest.

This trophy is a most interesting item as there seems to be very little that we can tell about the mug apart from the fact that it is indeed very old. The mug was presented by Mr C J Challinor on 29th March 1873 to Mr Millar and his winning yacht “Cygnet”. The mug is in the form of a highly decorative tankard with an ornate handle. The hallmark would indicate that the tankard was made in London between 1776 and 1783 so where it spent it first 100 years is a mystery! Unfortunately there is no maker’s mark so we are unable to identify the silversmith.

According to the trophy register previous winners of this magnificent trophy include: