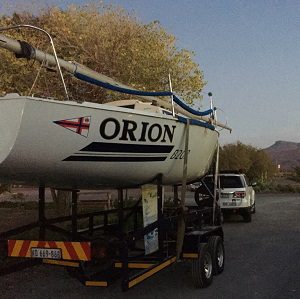 My Final Report before the event:

By the time everyone reads this, we will be on our way to Cape Town.  The boat arrived on Monday, 4th July 2016, towed down by our Commodore, Graham Rose, Honorary Commodore Willy Vandevere and our Club Secretary, Steve Coxon.  The team would like to express their appreciation and thanks to these three men for undertaking this enormous task and leading by example, I honestly don’t know of any other club that has such support for their campaign from everyone at the club.  She was towed down on a beautiful new trailer, which was possible thanks to Ellian Perch, our sponsor.  We would also like to thank Future Life for their sponsorship of cereals and energy bars and Club Marine for sponsoring the insurance that was required for the Lipton Cup.

Bradley Robinson and Paul Changuion are in Cape Town busy preparing the boat for the weighing and safety scruitineering.  Rob, Sandy, DJ, Kayleigh and Byron fly down late afternoon on Thursday from King Shaka International and Ricky Robinson will leave at approximately the same time from OR Tambo.

First thing on Friday morning the team will be weighed and then I am sure it will be off for a hearty breakfast after many days of dieting and watching what they eat.  By 12 noon on Saturday all preparation should be completed and this is usually when the team go out for some practice sailing before the Opening Ceremony is held later at Royal Cape Yacht Club,  our hosts for the event this year.

The first race will be held on Sunday, 10th July at 11am and Club Manager, Steve Rawlins has informed me that the tracker will be on display on the big screen and this will continue throughout the week.  I know that last year, there was much interest shown with many people going down to the club for lunch to follow the race.  For those of you that would like to follow the tracker, you can do this by downloading TracTrac and clicking on the Lipton

2016 link.  I will also be sending ‘Whatsup” messages from the water for those that cannot follow the tracker and if you would like to be added to this list, please send me your name and number to 0728478466.  I will also be putting a report up on the Orion Lipton 2016 facebook page and RNYC facebook page.

All that is left for me to say is that we are taking down and very committed and dedicated team that are determined to make RNYC and our sponsor Ellian Perch proud. Thank you for all the support and good wishes, they will certainly keep us going in what looks like a cold and wet Cape Town.