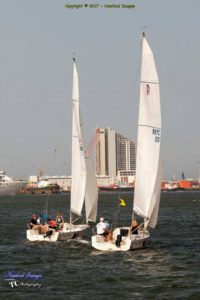 The 4th match of the Royal Natal Yacht Club Team Racing series which was sailed on Saturday afternoon in a blustery north easterly turned out to be a day of excitement and drama. The recently introduced Team Racing format continues to prove to be popular among sailors in Durban following the trend in Europe where Team Racing is the fastest growing yacht racing format. This week we welcomed a number of new faces on board including Dylan Siddall, Rob Le Rouw, Neil  and Luke Seale.

The teams were selected onshore by random draw and the boats allocated to each team by random draw with a crew member of each team drawing lots for their Pacer 27. This week the yellow team consisted of helmsman Carl Zimmerman on Pacer 1 and Coert Grobelaar on Pacer 4 while the blue team consisted of Rowan Price and Brad Rayson on Pacer 2 and 3 respectively. The fleet sailed out to the race course which was laid in the deep water channel of Durban Harbour off Pier 2 so as to avoid the scheduled commercial traffic movements. The course was a relatively short windward leeward course which made for some exciting sailing. To add to the excitement the Pacer 27 fleet was joined by a number of dinghies including Hunters, Flying Fifteens, and Lasers who joined the afternoon’s racing for their usual Saturday afternoon fleet racing. The efficient Bridge crew started the racing promptly at 14h00 as scheduled which seemed to catch out a large number of the dinghies who found themselves late for the start of the first race and having to sail hard to catch up the fleet.

The Pacer 27 team racing provided some exciting sailing and duelling between Pacer 1, 3 and 4 with Pacer 2 finding the conditions a little challenging and only managing to remain on the outskirts of the skirmishes leaving their team mates on Pacer 3 to defend their ground. The presence of all the dinghies on the race course provided an additional element to the test of skill, tactics and seamanship. On the third and final lap of the first race shortly before rounding the leeward mark while running downwind the Pacer fleet found themselves in close quarters with each other.

While jockeying for position with a series of gybes Pacer 4 found themselves in the wrong place on port tack with the rest of the fleet bearing down on them. With nowhere to go Pacer 2 unfortunately collided causing some damage forcing Pacer 4 to cut short their racing and retire for the afternoon. With a score of 1-0 to the blue team this presented a new challenge for the yellow team going into race 2 as they found themselves one point down and sailing alone against 2 opponents. Pacer 1 acquitted themselves well by the end of Race 2 and managed to force Pacer 2 into last place shortly before the finish line allowing them to win and levelling the score 1-1. Pacer 2 was finding the conditions challenging and seemed to have some trouble with their sail trim and manoeuvring nearly colliding with the bridge boat on the finish line much to the horror of all the bridge crew onboard the R B Townsend who were not sure whether to try and fend off Pacer 2 as she bore down or simply abandon ship. Fortunately the crew of Pacer 2 managed to regain control and avoid any disaster beyond a few bruised egos. Race 3 was started with only Pacer 1 and 3 on the start line levelling the playing field with one boat from each team competing against each other.

The final race of the day was far more intense with each boat working very hard to force the other into last place. The approach to the finish was particularly exciting especially on the final beat with the Pacers fighting their way through the fleet of Flying Fifteens. In the middle of the tacking duel the bridge crew were momentarily distracted by the sight of a Flying Fifteen mast suddenly inverting taking on a massive S bend as a side stay broke in the freshening breeze. The crew did well to immediately drop the mainsail and avoid breaking the mast. With another disaster avoided the bridge crew were able to focus their attention back on the rapidly approaching Pacers. By this stage Pacer 3 was narrowly ahead with only a few boat lengths to the finish line when she suddenly preformed a full one turn penalty crossing the line fractionally ahead of Pacer 1 much to the excitement of everyone watching and amid the howls of protest from Pacer 1. It later transpired that Pacer 3 had infringed Pacer1 much earlier in the race while rounding the weather mark and had decided that they could exonerated themselves by performing a one turn penalty before the finish line. Needless to say the correct interpretation of the Racing Rules of Sailing was explained once the fleet returned to their moorings. Once ashore experienced Flying Fifteen sailor, Greg Hurter, provided the Pacer crews with an informal de-briefing and shared some sail trim tips based on his observations of the afternoon’s sailing. By the end of the afternoon the general consensus among the competitors was that everyone had fun, learnt something new and had made new friends which are all features in line with the objectives of the RNYC Team Racing initiative.

Match 5 of the season takes place on 25th February and we look forward to more great racing and fun. For those members who have not yet experienced the thrill of team racing and who have not yet added your name to the leader board you are encouraged to speak to Margie Harris in the Sailing Office to  reserve you spot. Remember only 16 places are available per match and places are reserved on a first served basis. Entries are accepted for a full team of 4 alternatively enter individually and start earning points in the Team Racing League which is currently headed by Rowan Price closely followed by junior sailor Taine Steytler.