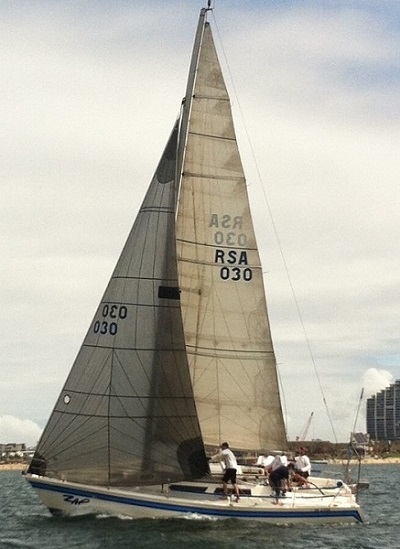 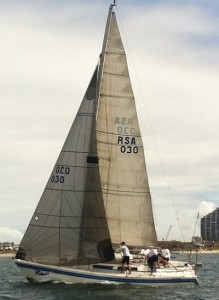 Despite Sunday being a rather dull and overcast day the sailing conditions offshore Durban can only be described as a “Mediterranean day” with wonderful flat seas, a gentle southerly breeze and an abundance of dolphins. The race format for the day was an unusual choice with the original intention being to sail around a ship anchored offshore. Fortunately the Race Committee had the foresight to lay a turning mark a safe distance astern of the nearest ship so as to avoid causing the master of the vessel any alarm with a fleet of yachts circling his vessel and raising safety concerns.

Scorpio had no sooner deployed the mark and relayed the GPS coordinates back to the Race Committee when the Port Control requested the ship to move to a new anchorage position as she was obstructing the shipping lane which was unusually busy for a Sunday morning with three large inbound vessels following in quick succession. By this time the fleet was busy charging out to sea under spinnaker with some of the faster yachts trying to chase the moving ship as she proceeded further out to sea. While the faster racing yachts pursued the ship they apparently missed all the radio communications from the Race Committee giving the advantage to the other boats with smart young crew capable of operating the GPS and their keen eyesight easily spotting the turning mark positioned precisely at the coordinates communicated by the Race Committee. With a neat gybe to the mark Zap and Zing enjoyed a good ding dong before rounding the mark and hardening up for the beat back to the finish. It was a spectacular sight to see the yachts line astern beating in to the Umgeni River mouth before tacking graciously along the beachfront with the faster yachts, who over stood the turning mark, following the fleet much to the amusement of the crew of Scorpio.

Southern Storm, with Warren Clarke at the helm, eventually powered through Zing who had been hot on the heels of Zap and slowly reeling her in from the turning mark. With less than 500m to the finish line Southern Storm took the lead to win line honours. A pleasant day sailing was enjoyed by all those out on the water and it was especially pleasing to see the RNYC Lipton team offshore practicing in the Club’s L26 Tranxene. While the fleet stretched their legs on a 17 mile race the Lipton team took the opportunity to hone their skills with a few hours of tacking, gybing and spinnaker drill. It is a wonderful sight to watch this young and highly talented team perform what can only be described as a well choreographed “yachting ballet”. This display certainly provided a great spectacle for those on the beach and there is no doubt that our team are very determined and well prepared to bring the Lipton Cup back to Durban later this year when they meet the country’s finest yachtsmen in the annual Lipton Challenge.

The months of April through to July traditionally provide some of the finest sailing days offshore Durban has to offer and we look forward to seeing more members out on the water enjoying the excellent sailing conditions and some well deserved R&R.