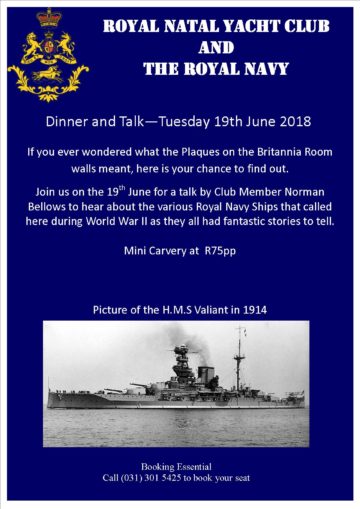 Well known member Norman Bellows will present a talk on a few of the HMS ship crests, otherwise referred to in nautical terms as  tampions, hanging on the Britannia Room walls, the presentation will focus on the crests covering the era between 1902 and 1945.  What is perhaps most interesting is that all the ships represented in the Britannia Room actually called in Durban and their officers were entertained in our clubhouse when the crest was presented as a token of appreciation for our hospitality. From one of the first battleships, the HMS Revenge, right to the very last battleship built by the Royal Navy, The HMS Vanguard, he will also talk about the war history and the human interest stories of a few of these ships.

In between the first and the last battleships built by the Royal Navy, he will point out some of the battleships and warships that affected the outcome of WWII and changed the world we live in today.  For example, HMS Revenge was one of the few ships to run on either oil or coal.  This encouraged the British government to get involved in Middle Eastern politics to ensure an oil supply for their battle ships. The historical significance of these crests is further reinforced considering that Durban was the last port of call for one or two vessels lost in battle.

Some of the plaques on our walls include HSM Suffolk, HMS Renown, HMS Valiant, HMS Queen Elizabeth, HMS Eagle, HMS Illustrious and HMS Gloucester and if you are unable to attend the talk then  feel free to pop in to visit Britannia Room when you are in the area to take a look at some of the other plaques.

Some anecdotal information on the HMS Valiant:

HMS Valiant was captained by Captain Charles Morgan when she was damaged by limpet mines in World War II.  After the war, a medal ceremony was held in Taranto (south Italy) to award the Italian equivalent of the Victoria Cross to Count Durand de la Penne, who sank the HMS Valiant at anchor in Alexandria harbour.  At the ceremony, Captain Morgan personally pinned the medal on the chest of the man that sank his battleship.