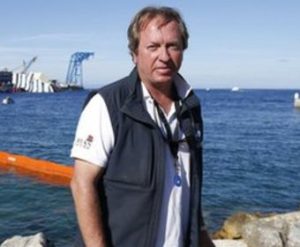 After several years of trying we have finally been able to tie down CAPT. NICK SLOANE to be the guest speaker at this year’s annual Trafalgar dinner.

Capt. Sloane has been a member of our Club since, as a youngster, he sailed Flying Fifteens with his father on Durban bay in the 1980’s. Although now resident in Cape Town he remains a proud RNYC member and committed Sharks fan! Capt. Sloane has been a sea farer all his life and has for many years specialized in salvage operations. He is acknowledged as an expert in his field and recently became a household name due to his involvement in the salvage of the Costa Concordia. We are indeed privileged to have him make time in his busy schedule to be our guest speaker this year.

The Battle of Trafalgar (21 October 1805) was a naval engagement fought by the Royal Navy against the combined fleets of the French and Spanish Navies, during the War of the Third Coalition (August–December 1805) of the Napoleonic Wars (1803–1815). The battle was the most decisive naval victory of the war and was one of Nelson’s finest victories which Royal Yacht Clubs around the world celebrate every year – and your club is no exception to this rule.

It’s a ‘men only black tie’ dinner in the Trafalgar Room. A sumptuous three course dinner is served, the port is passed, and the troops, or perhaps ‘Gentlemen of the Watches’, spar and drink copious toasts to each other.

Make a plan to attend, and even bring a guest should you wish.

The date is Friday 21 October 2016, a night when we can celebrate till dawn.

Pre-dinner drinks in the Britannia Room with Sherry on arrival followed by a superb served dinner. Wines included in the dinner. Port with Cheese and Biscuits. This is always a fun evening with plenty of banter.

So come on guys, get permission for a night out and make your bookings now.