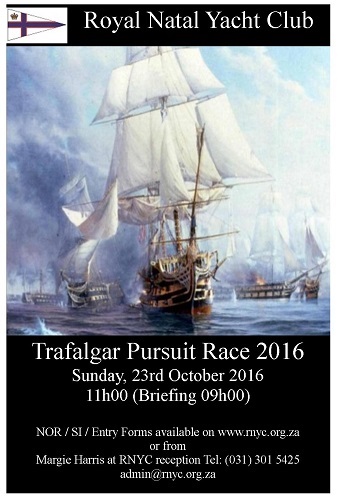 It is once again time to commemorate the Battle of Trafalgar with the Trafalgar Pursuit Race.

The Battle of Trafalgar (21 October 1805) was a naval engagement fought by the Royal Navy against the combined fleets of the French and Spanish Navies, during the War of the Third Coalition (August – December 1805) of the Napoleonic Wars (1803 – 1815).  The battle was the most decisive naval victory of the war and was one of Nelson’s finest victories which Royal Yacht Clubs around the world celebrate every year – and your club is no exception to this rule.

Copies of NOR / SI and Entry Form can be downloaded.